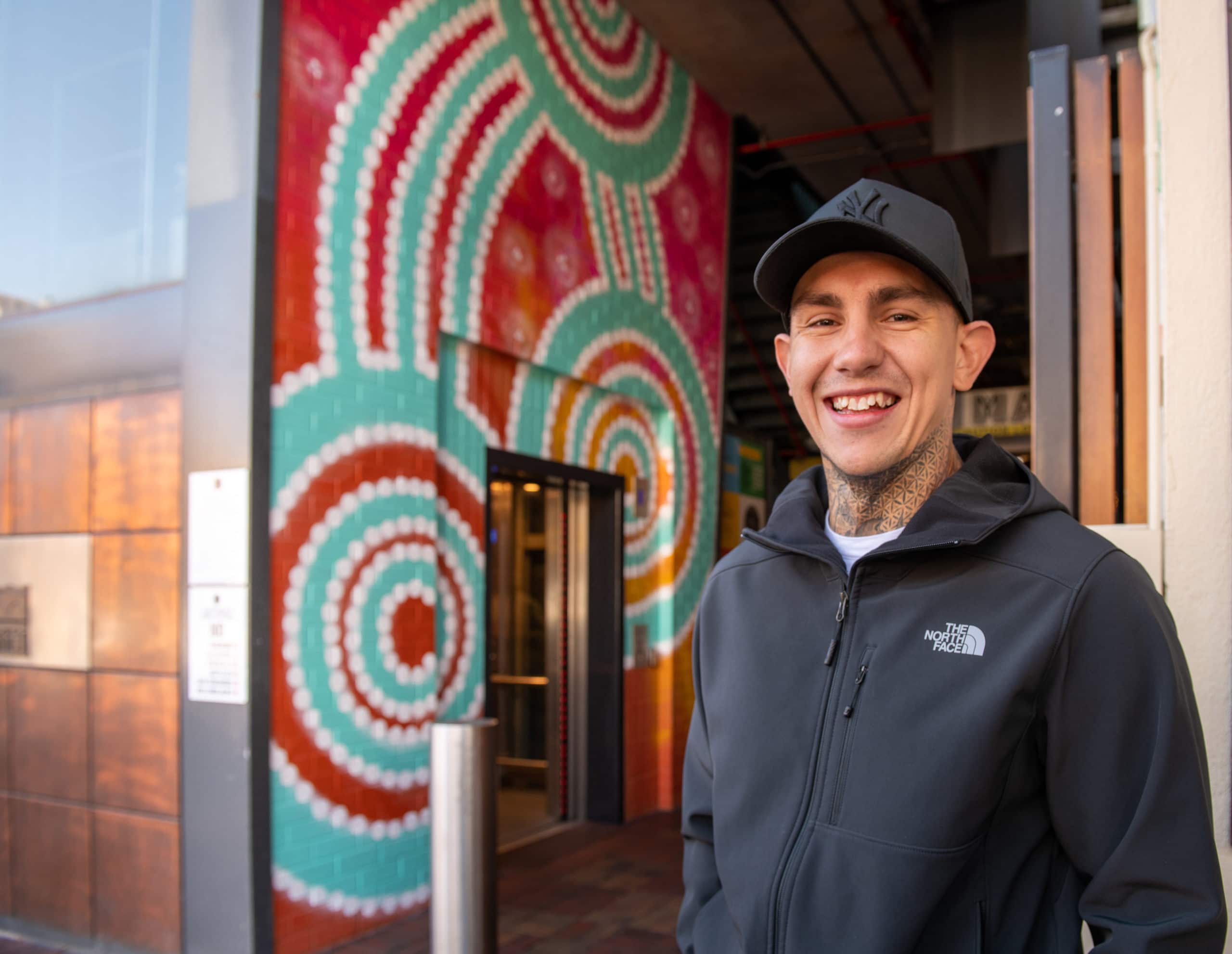 This mural was created by Aboriginal artist Shane Cook in May 2021, and reflects the Adelaide Central Market’s core values of inclusivity, community and multiculturalism.  The circular ‘meeting places’ represent the movement between communities and the colours represent the many different cultures of our Market interacting with each other.  Materials used were acrylic and aerosol.

The mural is located at the Gouger St lift façade on the ground floor.

Watch the mural come together here. 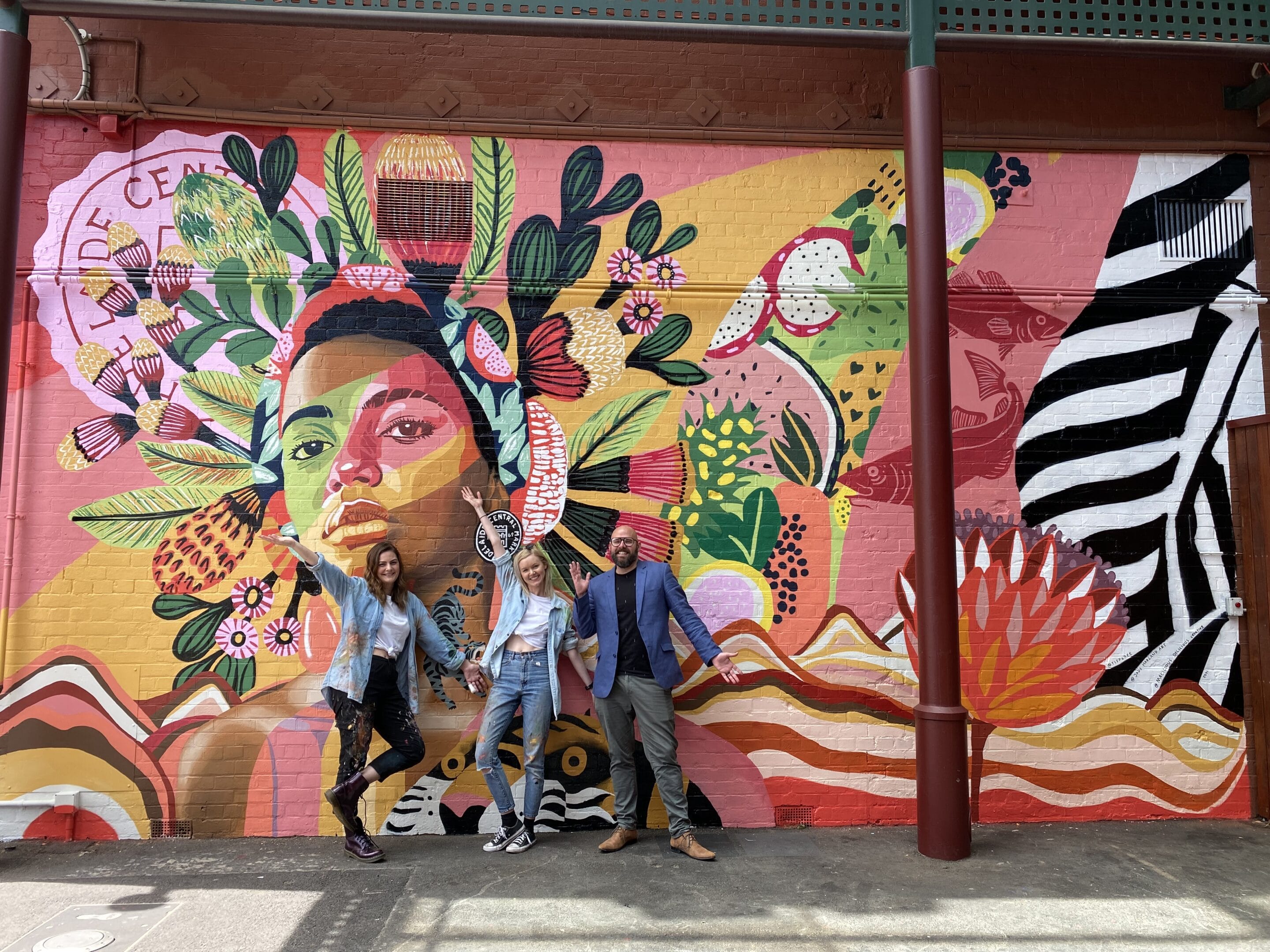 This new mural ‘Market Daydream’ was completed as a collaboration by artists Tiff Rysdale, Jade Harland with Ryan Turner (Malicious Delicious) in October 2021.

Tiff, Jade and Ryan are a creative supergroup who have joined forces to bring to life the walls of Adelaide.  The team have previously collaborated on work in retail settings, bringing together Ryan’s background of illustration and design with Tiff and Jade’s visual art skills.  Their work seeks to capture the spirit and cultural heritage of its location.

Designing a mural for the Adelaide Central Market was an exciting opportunity for the team.  From the gorgeous aromas of fresh produce and paella cooking to the vivid colours of local fruit and vegetables, Australian flora blooming at the flower stands, fresh fish wrapped in newspaper and the welcoming faces of the passionate people working behind the stalls.  Their aim was to depict the many facets of Market life. This mural titled ‘I think the Colours of the Markets’ by Lucinda Penn (LCND), was completed in October 2021.

Lucinda says “When I think about the Central Market, I’m taken back to my first memory of visiting them on my year 3 French class excursion to taste French cuisine. I remember my eyes being opened to the many multi-cultural offerings. I think of my dad journeying from the hills to the markets just to buy the freshest organic veggies. I think of holding my younger sister’s hand, guiding her around the buzzing, packed maze on a busy Friday night with my family. The bright veggies poking out of perfectly organised rows in every corner. The green bowls on red tables at Asian Gourmet. The rich pinks and oranges of the Turkish Delight Shop. The bold contrasting black and white diamond tiles in Marino Meats. The abundance of colourful native flowers. The creamy cheeses looking back at me on display. The list goes on…

​I have captured this multi-cultural rainbow in my design. It celebrates the energy of our diverse Adelaide Central Market with imagery that directly represents it as one of the largest traditional undercover produce markets left in the Southern Hemisphere. By collaging contrasting pieces of produce, the array directs you into the markets to find all of these goodies. My design is unique to other murals in the area and will become synonymous with the markets as a direct reflection of not only what’s on offer but the bustling, bright and lively atmosphere we love”.

This mural was a collaboration between Vans the Omega and KAB101, completed in 2013.

Joel Van Moore, under his artist name Vans the Omega, is internationally recognised as one of Australia’s leading Street Artists. Before focusing exclusively on his art, Joel had a successful career in graphic and fashion design. Joel has worked and painted extensively both nationally and internationally in conjunction with festivals, events, government bodies, businesses, private commissions and fellow artists since 2000.

Street-writing since the early eighties, KAB101 has developed a marking style reflective of his personality. His work is based on calligraphic signature markings and mechanical type styles. His studio paintings consist of these same styles, telling the stories of identity, his emotions and experiences related to his past and present affinity with writing his name and taking space.

Utilising spray paint, inks, markers and brushes he constantly finds himself exploring new mediums to produce works that reflect the beauty and sadness of life.